Elective induction of labor is the process where a woman is stimulated with some form of medication that helps the uterine cervix soften up and uterine contractions start; the combination of uterine contractions and progressive cervical shortening constitutes labor. The subject of elective induction of labor as opposed to waiting for the mother to go into spontaneous labor has been one of the significant obstetrical controversies. Many studies have been performed and yet, there are many obstetricians who profess that elective induction is a bad thing and as many who profess that it is a good thing. The better evidence in my judgment tilts in favor of elective induction because it seems that it reduces the risk of a cesarean section but more so, prevents significant fetal and neonatal morbidity or even death.

The missing link of these studies: the placenta

What is however missing from most of the studies regarding the benefits or risks of elective induction of labor at term is common sense and understanding of placental physiology as well as uteroplacental-fetal vascular interactions. In contrast, there is an abundance of bias from both sides of the controversy based on fiction, unsubstantiated beliefs, and the misconception that everything natural is safe. Maternal mortality in the US is 3 times higher than in the rest of the developed countries. In the US, 1 in 3,000 pregnant women dies because of pregnancy complications; in comparison, only 1 in 10,000 pregnant women dies in other developed countries. What is worst, is the fact that maternal mortality increases steadily since the early 1990s. Maternal mortality during the 19th century in rural England was 25/1000 or 2.5%. So, we have come a long way in protecting our pregnant patients but much more must be done. Fetal/neonatal mortality was not as important as maternal mortality throughout history. It is teleologically sensible that in nature’s interest, a mature reproductive “unit”, aka the mother, is much more important than the uncertainty of a neonate. A surviving neonate next to a dead mother represents a serious natural failure. In contrast, a dead neonate next to a healthy mother is preferable because this mother will have many more chances to reproduce enough surviving neonates to allow our species to continue roaming the earth. Therefore, preventing maternal death has been and still is the priority of nature and fetal protection follows. Today, with our relatively advanced obstetrical and surgical capabilities, we have the luxury of not having to face the dilemma, of the mother or the baby but we still have a long way to go in reducing the death rates of pregnant women.

Personal biases dictate what we choose to support

Too much energy and money have been spent trying to learn if elective induction is a better choice than expectant management until the commencement of spontaneous labor. Like always in clinical research, most of the studies are flawed and unable to reject the hypothesis they embarked upon to reject; the only benefit of such incomplete studies is that they become ammunition for physicians to support their biases. Those supporting elective induction use the positive studies and ignore the negative ones, and vice versa. Past-century philosopher Bertrand Russell describes this succinctly:

What has been blatantly absent from this dialogue/controversy is the fetus and the placenta. We all know that fetal monitoring with electronic fetal heart recordings (EFM) is a worthless or even harmful method for the evaluation of fetal well-being. Therefore, the way fetal well-being is assured in most pregnancies that make it to term and beyond today is flawed, considering electronic fetal heart monitoring (EFM) is the standard of care. Let us not forget that even in normal placentas, the aging process of the placenta is accelerated at term and in some fetuses more than others, creating a significant supply/demand mismatch that can put the fetus at serious risk.

The fetal risk of death is high after 39 weeks

Fetuses that remain undelivered beyond 39 weeks face a death risk of 1/300 to 1/500. This might sound like a small risk, but it accounts for the loss of about 6,000 to 7,000 lives annually in the USA alone. However, for every baby that dies, there are several, babies that come near death, but they do not die. These babies will suffer from variable short and long-term morbidities as well as increased infant mortality. So, we allow our patients to go into a wait-and-see game, just because it has been the natural way for millennia to wait until the baby comes?

Elective induction of labor is not natural but what is?

Death from cardiovascular disease is as natural as scorpions and snakes and yet, we spend billions and billions every year to prevent it. The same is true for most human maladies. What gives us the right to ignore the life as well as the quality of life of these unfortunate fetuses and their mothers that happened not to be in labor by 39 weeks? There is more than enough evidence out there that delivery at 38-39 weeks is associated with the best neonatal outcomes and reduces the risk of cesarean delivery. If, however, we were to introduce the missing link, the state of fetal-maternal-placental circulation at term, then we could be much more informed in making the proper decision that helps our fetuses to preserve their health and their lives and reduce risks to their mothers. Uterine arteries are the only supplier of oxygen and nutrition to the fetus.

Uterine after blood flow is very important for the fetus

A significant number of even low-risk patients have pathologic uterine artery blood flow and poor placental function. These are the patients who are most likely to end up with a cesarean section under unpredictable emergency conditions, in the middle of the night, as well as, with a dead baby, or a seriously compromised baby whose future will not be what had been written in his/her genes. Fetuses are extremely resilient and have magnificent ways of defending themselves from all kinds of threats. They can redistribute their most oxygenated blood to their brains and overcome, at least for some time and under non-stressful conditions, placental insufficiency and avoid adverse outcomes.

This however will not be the case if such fetuses are allowed to remain in utero until the onset of spontaneous labor sometime in the future. It should be clear then that the controversy of elective induction or not, even though on most accounts, elective induction at 39 weeks provides benefits to both, mother, and baby, becomes mute in the absence of a clear understanding of the state of the fetal-placental-maternal blood flow relationships and the presence or absence of fetal blood flow centralization (brain sparing), which is a sign of placental insufficiency.

It is time, therefore, that we incorporate fetal and maternal Doppler assessment prior to the decision of elective induction to refine our ability to select the mother-fetus couples that would benefit the most, against whatever risks they are going to be exposed. If we can provide more benefit for the risk we take, this is good medicine and not the personal beliefs of any obstetrician. As for the “natural birth” argument being the safe one, it is time for us to realize that harm and death are part of nature and there is nothing to suggest that all-natural processes are the safest indeed.

Health care insurance industry and the push against elective induction.

Based on faulty and misguided clinical studies of the past indicating an increased risk of a cesarean section after elective induction and because the cost of a cesarean section is significantly higher than natural childbirth, the health insurance industry initiated a war against induction of labor. Nothing motivates any industry more than pure profits. For this reason and only, health insurance companies exerted a mighty political influence that tricked down to the hospitals and forced them to initiate war against any physician who insisted to practice elective induction of labor. Name-calling and professional embarrassment and dismissal became the standard modus operandi of hospitals against obstetricians who performed elective inductions of labor. This forced many excellent obstetricians to stop practicing elective inductions. This happened between 2005 and 2007. Recent studies indicated that fetal mortality after 39 weeks gestation increased significantly after 2007 because of forcing pregnant women to wait until labor starts naturally. More recent studies have shown that in addition to increased fetal loss, the risk of emergency cesarean section increased significantly in patients who were forced to wait until they go into spontaneous labor. One can see here the power of the corrupt healthcare insurance industry in manipulating fetal and maternal health to increase profits. I believe the truth will soon disseminate to most obstetricians and the pendulum will swing back towards favoring elective induction of labor at 39 weeks. 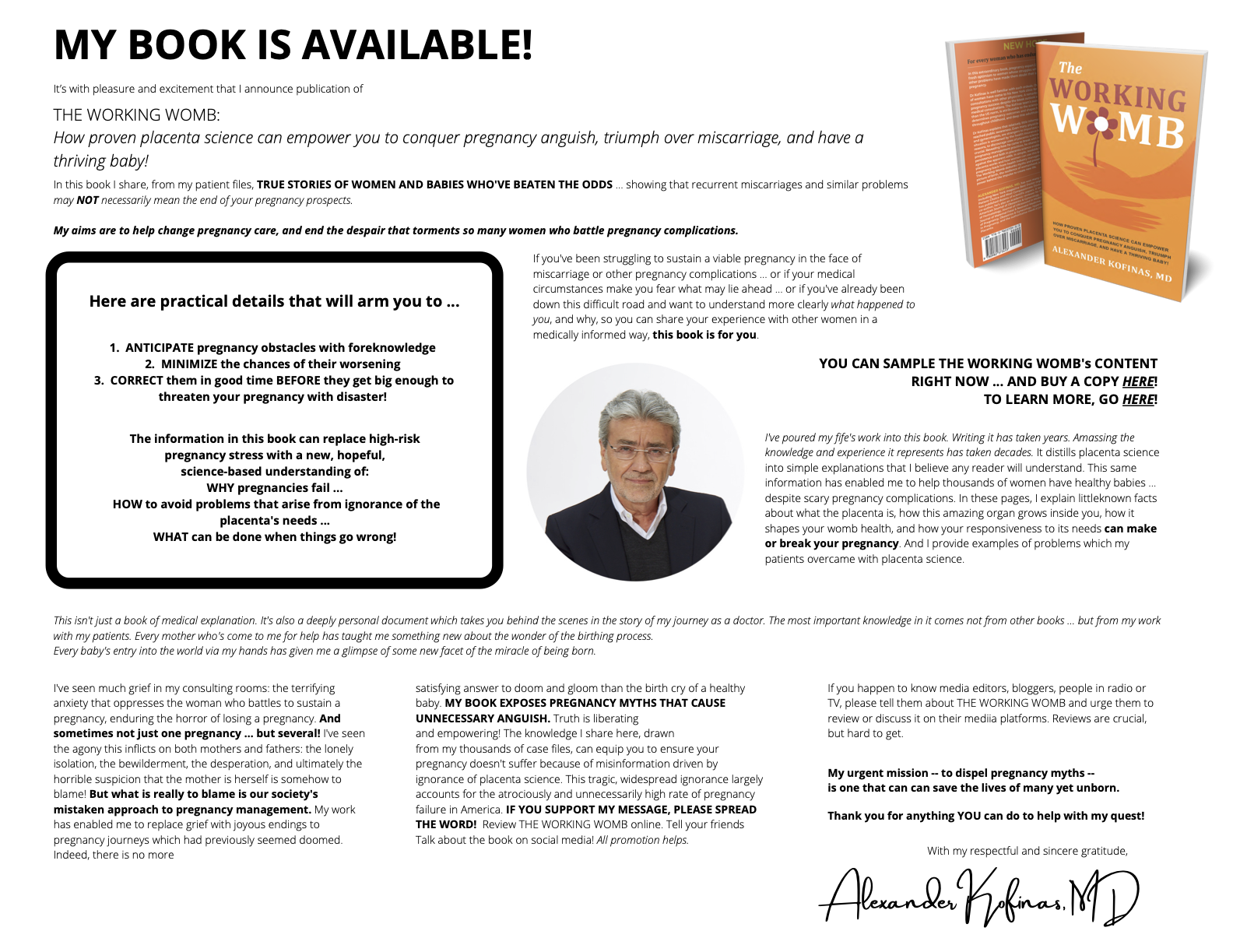